Installed on TX van receiving radio links of the connected networks in case of a lack of radio links, the van can be placed in elevated position to have a better radio coverage, reporting on an only operative frequency all radio operators intervened on the emergency’s theater. Aras system born to meet needs of radio’s connection and coordination between aeronautical means, terrestrial networks and TLC’s different systems. 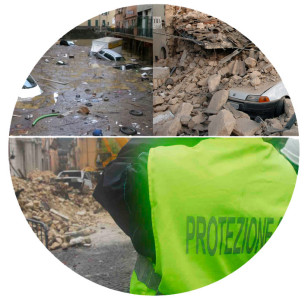 The experimentation phase which lasts from 5 years in collaboration with the Minister develop economic-communication and ENAV, passed each test by radio linked bodies with simulations and real interventions on the ground. Aras system allows the aircraft’s pilot to speak through the aeronautical radio on board, with the personal on the ground at the intervention site and with the operative rooms of the concerned bodies, remotely using a terrestrial network VHF or UHF, analogical or digital and a PMR radio, automatically interfacing with the terrestrial/aeronautical system.

This thing represents an huge operative advantage because the pilot and the operators on board have the possibility to communicate with the operating rooms, the staff on the ground and the institutional stations in every moment of the flight so that they can receive all news in a very short time from the moment of the take-off even the arrival on the place.

This news could be information on the precise position of the site, closeness to high voltage cables, valued and updated time and ways of intervention, predisposition of the staff on the ground. Using board radio equipment, Aras system is immediately available for every aircraft committed in some emergencies although not previously equipped, it also doesn’t forces any aircrafts to make changes to their own radio apparatuses and it is completely in good standing according to Europe’s aeronautical regulations.