Aras TBT 300 has the great benefit of being able to be interfaced with every kind of transceiver with DMR-TETRA-DIGITAL-ANALOGICAL technologies because it takes advantage of analogical outputs even if not provided by the interfaces on the devices to be integrated ( depicted systems are just an example of integration). 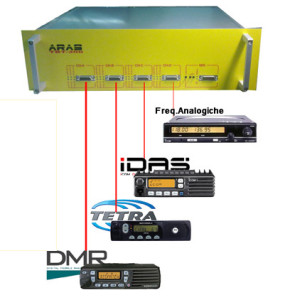 HOW DOES IT WORK:

The system is made up of four independent channels (Tx/Rx) in audio band prepared for being connected to other four transceivers with a fifth dedicated channel for communication of BF signals coming from FM receivers. Each channel is independently managed through a microcontroller architecture.

The system can be configured defining a prior channel (default nr.x) in which calls made from another enabled channel are inoltrated.

Successful connection on the radio mesh (between channel and the prior once) is reported by the green led M/SLAVE on. This connection remains active for an established maximum time in programmation (programmable time out, 8 seconds default) and it is reset with each use of concerned channels. 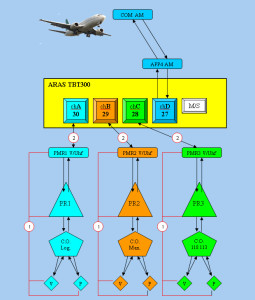 In case of normal operation, the system has all the doors not connected between themselves but if there an activation command (pulse or DTMF) interfaced to Aras can perform their normal activity. Example: figure 1, interfaced on CHd AM apparatus calls “logistic” with 2 releases it enables CHa, closing connection with B and C doors that would continue to be autonomous and isolated. The communication that is established is automatically dropped by a settable “time out” if there isn’t traffic so as to bring Aras in call waiting.

ALL ABOVE ALL (Tutti su tutti)

The doors are all connected  both Rx and Tx, so everyone can transmit and receive obviously waiting that the channel is free before committing it.

FILTERED ALL ABOVE ALL (Tutti su tutti filtrato)